After getting off the night bus, Danielle, Sam and I stored our luggage in lockers and picked up a snack at the station. While I grabbed a green smoothie to go, Danielle and Sam wanted to experience McDonalds in a foreign country. To the American Embassy we went. While I sipping on my lunch, I noticed a group of dressed-up girls walk in. One of them was especially sparkly and wearing a Bride-to-Be sash. That’s right: this was a Polish bachelorette party at McDonalds, in the middle of the day. I found it hilarious.

After the snack, we caught an Uber to Auschwitz. (That’s something you don’t get to say everyday). Our Uber was not very friendly at first, but then Prague came up somehow and he began telling us about all the drugs he’s done there. Hopefully he wasn’t driving under the influence.

When we arrived, we learned that we had to wait until 4 PM to go inside on our own unless we were on a guided tour (which wouldn’t be til 3:30 anyway). Until then, we were welcome to take the free shuttle to Birkenau and walk around there, so that’s what we did. What a day. Though none of us actually broke down in tears, it was certainly an eerie experience. Both camps were combinations of original and recent structures. There was a collapsed gas chamber, as well as prison basements and a room full of human hair that had been scalped from the victims of gas chambers. Never before had I experienced something so simultaneously intriguing and horrifying. On top of everything horrible, we learned that the Nazis made their victims pay for their own train tickets to get to these camps.

Fun Fact: It’s free to tour Auschwitz and Birkenau. I’m also pretty interested in touring a Japanese internment camp back in the States so I’d you have tips, let me know! 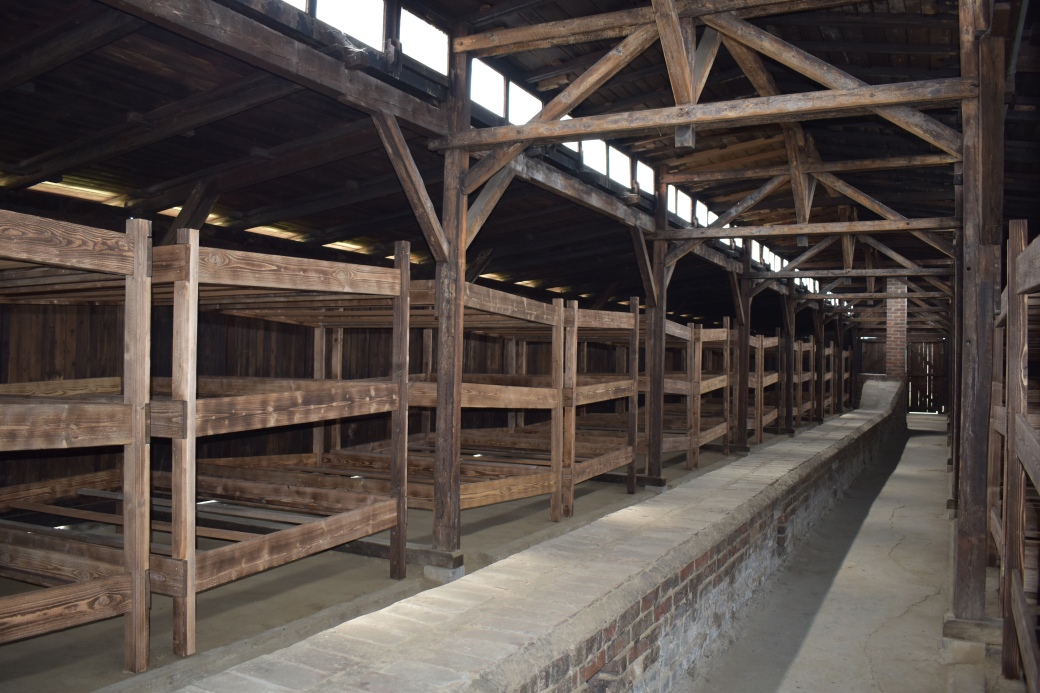 The main difference between these two camps is that Auschwitz is very condensed, and was home to more murders than any other concentration camp. Birkenau is very spread out, as it covers a larger area. The pictures you see are a mix of both camps.

In between camps we grabbed a plate of delicious potato and cheese pierogies, which were not served with sour cream. Besides this cafe, there was a book store on site.

Fun Fact: there is NO gift shop here at Auschwitz. Makes sense. I took some rocks instead…

It’s hard to properly describe this place, but it was well worth the trip. It felt like we were taking a pilgrimage to really sink into the history of the Holocaust. If you’ve ever wanted to come, you should.

To get back to Krakow, we hopped on the 7:15 bus and drove about 45 minutes. We ate burritos at a Chipotle-esque place within the Galleria across from the station and then we got cleaned up in the bathrooms to prepare for yet another night bus to Budapest. This time we went all out, putting on our pajamas and essentially preparing for a bus slumber party. Half of the bus station was shut down and we were sitting there waiting.

Out of nowhere, I got a phone call from Hawaii.

Relevance: in March I had applied to a program called FoodCorps to teach gardening and nutrition to marginalized children, and Hawaii had been my first choice state. The deadline for the interview process had gone by in early June, and right before leaving for this trip I received a national rejection email informing me that all of the available spots had been filled. I was disappointed to say the least.

I answered the phone, despite the international minutes. I am so glad I did. On the other end of the call were two gentleman from a school in Oahu who said they had not, in fact, filled all of their spots. They asked when I could do an interview. I told them I was sitting bored in a bus station and that if they’d like to talk now (in my pajamas) I was ready. We ended up video chatting for about 30 minutes before the bus came, and they wanted to talk to me again the next night.

Once on the bus, I got two more phone calls. One from another school in Hawaii and one from a school in Oregon.

Long story short, the next night I did a more legitimate video interview while in my hostel. The next morning I had a contract to sign sitting in my inbox.

On August 4th, I will begin a week training in Portland, Oregon. After this training, I will be flying to Hawaii to work at Kamaile Academy on the island of Oahu.

Needless to say, I had a lot of trouble going to sleep on that bus.

Amidst major life changes, I have decided to go travel the world. This blog is dedicated to retelling the tales of my excursions and exploring the cultures through which they occur. Follow me on this journey! View all posts by FloridaGirlAbroad